The London Space Innovation Centre was established at City, University of London in 2020. It acts as a hub for coordinating and promoting multidisciplinary research, education, and enterprise projects in space-related fields. It also facilitates collaboration between academia, industry, and the public sector with a focus on connecting the space sector in London with other sectors and industries.

The global space sector is expected to continue growing strongly with estimates forecasting $1 trillion in annual revenue by 2040. The sector has achieved remarkable progress in relatively short period of time and is now an essential part of the engine of the global economy. Space Technology is fundamental to all aspects of everyday life and it has revolutionised capabilities in areas such as climate observation, communication, healthcare, land management, supply chain management, broadcasting, logistics, transportation, navigation, national security, and soon, tourism.

Space is a great British success story. Space-related organisations are growing in number and generating large economic output. The sector currently has 6.5% of the global space market and has set itself the target of 10% by 2030. This target requires at least 30,000 new jobs in the sector and currently employs approximately 38,000 persons, supporting approximately £350 billion of UK GDP.

The space sector is marked by high productivity, representing about 2.7 times the national average. The UK government has already pledged significant investment in the sector due to its profound importance in buttressing social and economic wellbeing.

City, University of London has a very rich history in aeronautics, space and space travel.

Its first foray into aerospace goes back to 1909 when its predecessor, the Northampton Institute, started classes in Aeronautics. Renowned engineer and industrialist, Sir Frederick Handley Page - after whom City’s aeronautical laboratory is named - arrived as a lecturer in 1910.

An important moment in City’s academic journey in space-related studies came in 1957, when its predecessor, the Northampton Institute, was designated the Northampton College of Advanced Technology (CAT) during a Cold War era characterised by febrile competition to develop and launch rockets into space.

A key person in the history of space studies at CAT, and its later incarnation as City University, was Russian émigré, Professor Grigori Tokaty, who taught and researched in the Department of Aeronautics and Space Technology.

Professor Tokaty’s career involved developing aeronautical technology for the then USSR and the USA. He worked with the United States’ National Air & Space Administration (NASA) during the 1960s.

Indeed, it was Professor Tokaty who facilitated the memorable visit of astronauts David Scott, Alfred Worden and James Irwin to City University in 1971. They were members of the Apollo 15 mission who landed on the Moon. They presented then Vice-Chancellor Sir James Sharp Tait with a piece of the heat shield from the Apollo 15 command module and a photograph of the Lunar Roving Vehicle which are kept at City.

John Hodge, a 1949 engineering graduate of City's predecessor institution, the Northampton Institute, was a flight director in Houston, Texas, for several Mercury, Gemini and Apollo space missions. He was interviewed about his work in 1966, by BBC Tomorrow's World presenter Raymond Baxter, and, in 1999, by Rebecca Wright, of the NASA Johnson Space Centre Oral History Project. 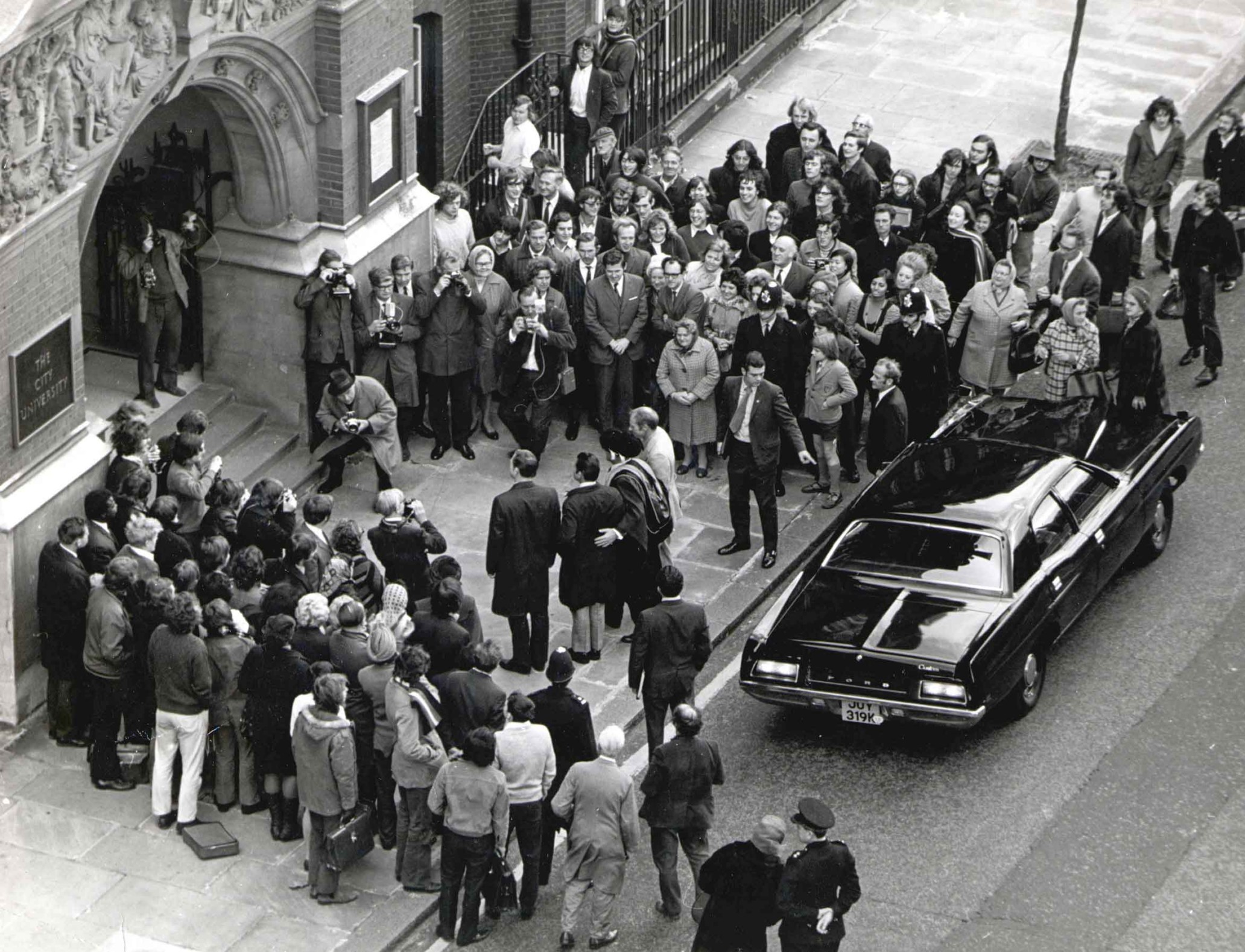 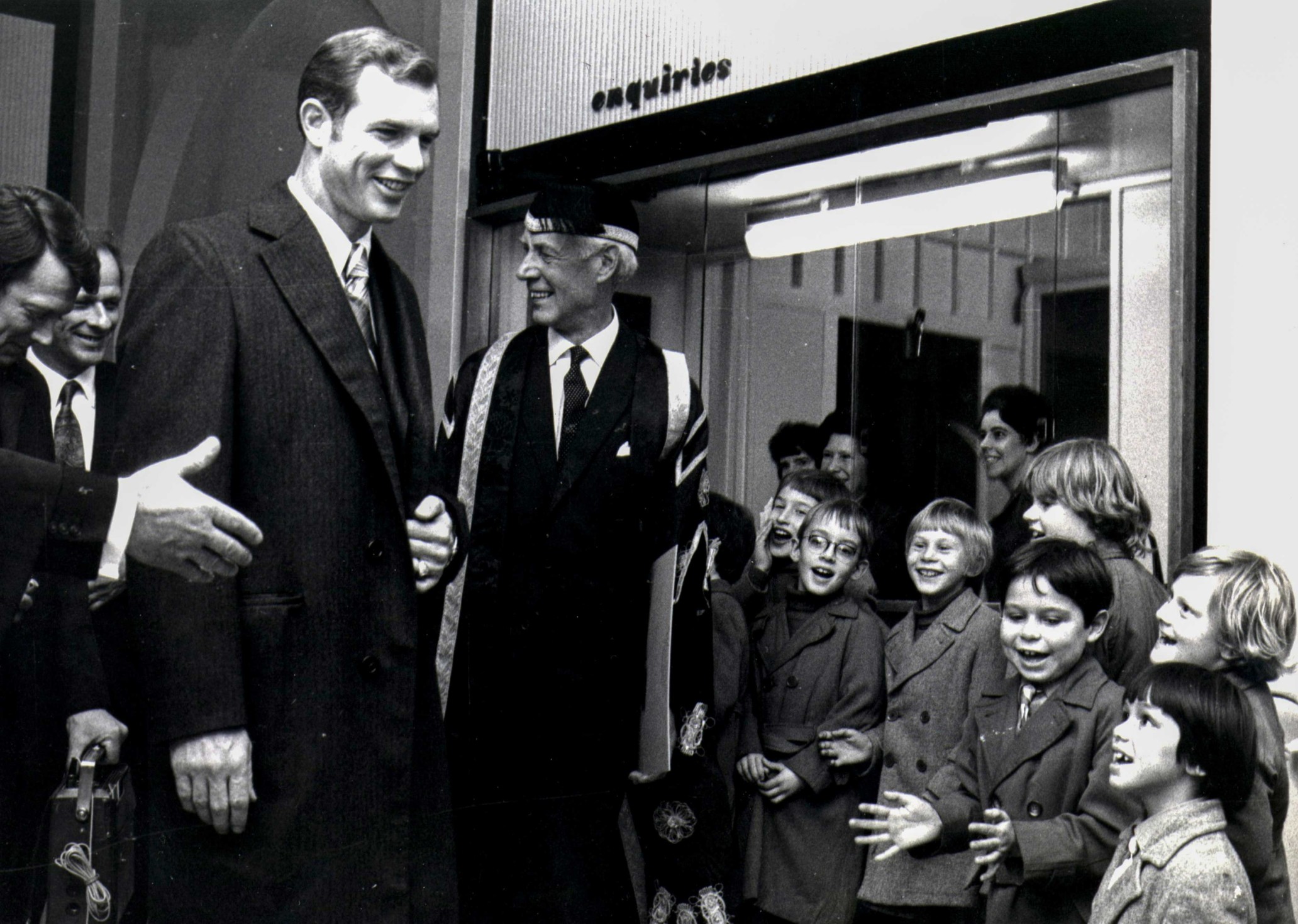 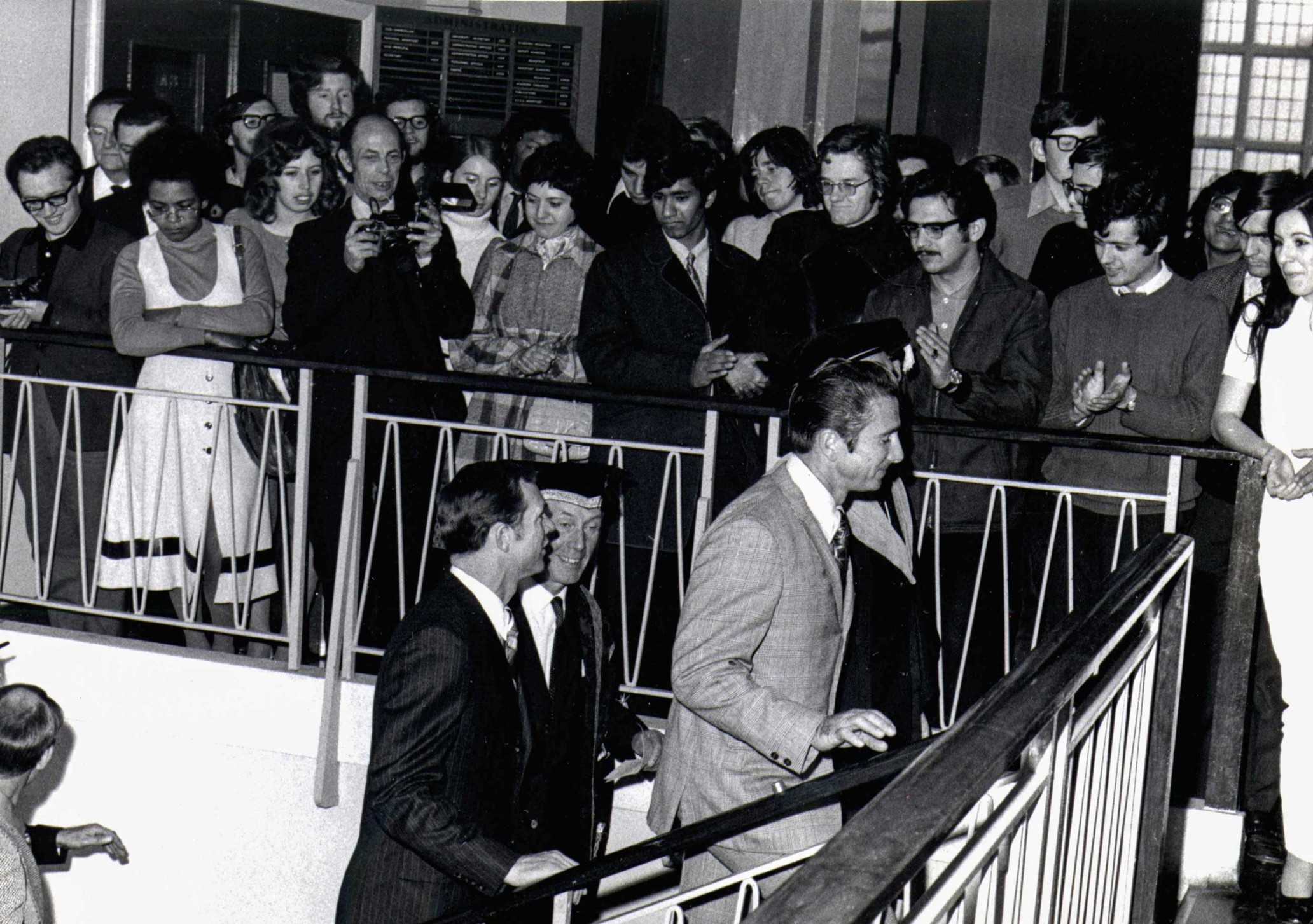 Former President of City, Professor Sir Paul Curran, is a former NASA research scientist and advisor to the European Space Agency (ESA). Sir Paul's award-winning work in ecological Earth observation, involving the use of satellite sensors to monitor the environment, is published widely. With a focus on climate change, his most recent research involved the estimation of terrestrial chlorophyll content at regional scales. Appointed to the Chair in Physical Geography at the University of Swansea in 1990 Sir Paul had previously held a research post with the NASA Ames Research Center in California, academic posts at the Universities of Sheffield and Reading and a visiting academic post at the University of New South Wales.

Sir Paul is a recipient of the Remote Sensing Society's Gold Medal and has received achievement awards from the Royal Geographical Society, NASA, ESA and the International Society for Photogrammetry & Remote Sensing and Honorary Doctorates from Grand École ESCP, Paris and Peter the Great University, St Petersburg, Russia. Her Majesty, The Queen, approved the award of the Patron's Medal of the Royal Geographical Society, for his 'international development of geographical science' and he is a Freeman of the City of London.

City’s historical and recognised research strengths in Aeronautical Engineering, Electrical and Electronic Engineering and Artificial Intelligence give a considerable boost to the London Space Innovation Centre’s academic profile. The London Space Innovation Centre was established in September 2020 to bring together the space related research and innovation from across the City, University of London.  It also acts as a hub for coordinating, collaborating, and promoting multidisciplinary research, education, and enterprise projects in space-related fields. It will also bring together research groups with complementary expertise around key challenges, which will have a significant impact on the design and operation of cost effective, reliable and safe space services, across the value chain and help the UK to meet its growth targets in the sector with positive societal impact.

City, University of London has developed internationally recognised expertise in data processing and visualisation, artificial intelligence and cyber security which underpin the vast majority of future potential high growth space applications. Thus, the London Space Innovation Centre’s main focus are on the quality assurance and provenance of data, legal frameworks for regulation and commercial transactions, risk management and ethics. This is a unique combination of expertise that has the potential to address significant need and opportunity in the space sector. It also lends itself to underpinning innovations in financing space projects and regimes for risk mitigation. Ultimately, this focus of the centre will tackle challenges and opportunities in upstream operations including launch of space vehicles and satellites and their on-board equipment and downstream applications exploiting data and images obtained from space, playing an important role in the supply chains of the space sector.

For further information about City and Space, please visit here.

In addition, there are over thirty academic staff from various schools at City, University of London with research activities and interests that are related or can be channelled to space sector in key focus areas of the LSI.

A spacecraft’s navigation system is of paramount importance for missions involving proximity operations, playing a pivotal role in the success of objectives based on the careful coordination of two or more bodies in space. In particular, new and ambitious rendezvous and docking (RVD) programs implicate the execution of precise manoeuvres at close distances with fast reaction times, justifying the need for autonomous decision-making capabilities to run onboard without a ground station in the loop, especially outside of low Earth orbit. These encompass activities such as on-orbit servicing (OOS), non-cooperative rendezvous (NCRV), and active debris removal (ADR). Prof Nabil Aouf and RAMI have a decade’s worth of experience in the development of autonomous navigation technology, not only for RVD but also for planetary exploration with rovers. The team has been pioneering the use of vision-based systems for sensing, which are poised to replace active but costlier hardware as the de facto sensors for navigation in space. The developed research work is recognised both at national and international levels, counting with extensive collaborations with the European Space Agency (ESA), Horizon 2020 Programme (H2020), and the UK Engineering and Physical Sciences Research Council (EPSRC), as well as with multiple Space industrial partners.

Orbital AI-based Autonomous Refuelling (OIBAR) represents RAMI’s contribution towards the FAIR-SPACE Hub for Future AI & Robotics for Space, administered/led by Surrey University and funded by UK Research and Innovation (UKRI) and the UK Space Agency. This project aims to develop artificial intelligence (AI)-based solution for space docking applications, permitting an autonomous and accurate refuelling of existing satellites or stations in space to maintain their activities for longer durations. The two main solution components presented in this work are: 1) a deep learning vision-based orbital relative navigation algorithm combining the strengths of convolutional and recurrent modules to exploit temporal correlations in RVD video sequences to safely approach and dock to the target body; and 2) an intelligent hardware mechanism achieving the mechanical docking and refuelling operation of the target. This integrated software/hardware solution will be validated in simulation and experimentally at both RAMI and ESA GRALS facilities to meet space standards and performances for this kind of operation.

Autonomous robot navigation and decision-making have been a hot research topic in recent years, resulting in major advances and breakthroughs. Currently, autonomous robots can perform complex tasks in various domains including, but not limited to military, medical, space, and commercial applications. Deploying a team of robots to the lunar surface for assembly and construction tasks is one of the main plans for the world's space agencies, including ESA. Prof Nabil Aouf and the RAMI group at City, University of London participate in the PRO-ACT, H2020 Space Robotics project, led by Space Applications Services NV/SA (Belgium), to develop and demonstrate cooperation and manipulation capabilities between three robots in space environments.

The PRO-ACT project (Planetary Robots Deployed for Assembly and Construction of Future Lunar ISRU and Supporting Infrastructures), is one of the five projects that has been selected by the European Commission to be financed in the second phase of the Space Research Cluster (SRC) on Space Robotics and Electric Propulsion. This project aims to develop key technologies for multiple robots to work cooperatively for future lunar assembly and construction purposes including cooperative goal decomposition, collaborative mission planning and manipulation, assembly of supporting infrastructure and cooperative visual Simultaneous Localisation And Mapping (SLAM). City University of London is leading the technical developments related goal decomposition and task allocation and cooperative visual SLAM. To demonstrate these capabilities, the three robots are being used: the Veles (a six-wheeled rover from PIAP-Space, Poland), Mantis (a six-legged walking system from DFKI, Germany), and a mobile gantry (from AVS, Spain).

The Veles mobile robot has a heavy-duty manipulator with interchangeable end effectors, mobility on moderately uneven terrain, with long endurance. The Mantis hexapod provides the capability to move on challenging terrain, use two legs as dual manipulators with a limited payload. The mobile gantry is in a stowed configuration and is required to be unloaded by the two robots. It can self-assemble into the final configuration with elementary assistance by the robots with passive mobility. The integration of common building blocks for robots that are composed to create functional and intelligent robotic agents will be demonstrated in the Space Exploration Hall in DFKI, Germany. Apart from the lunar exploration mission, a transfer of the applied technologies to terrestrial applications will be evaluated. 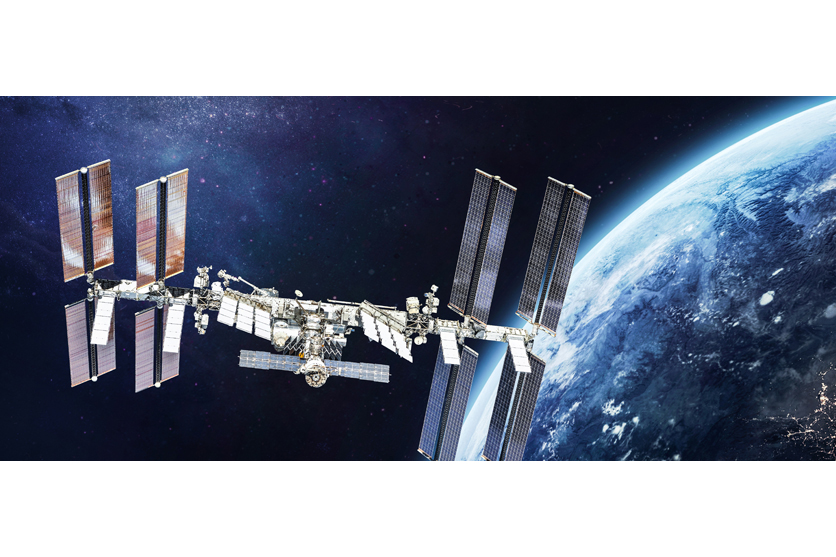 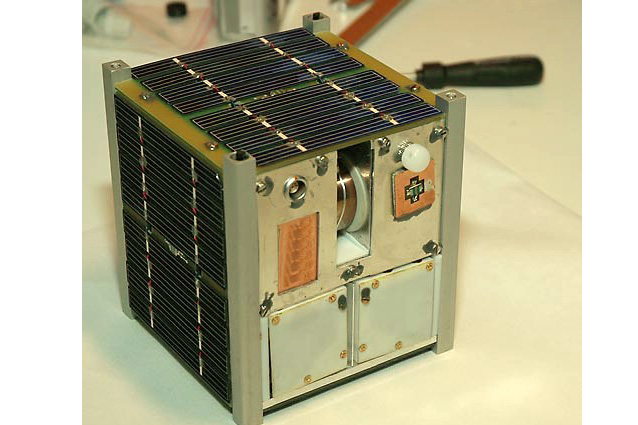 The ambitious competition is supported by the London Space Innovation Centre.... 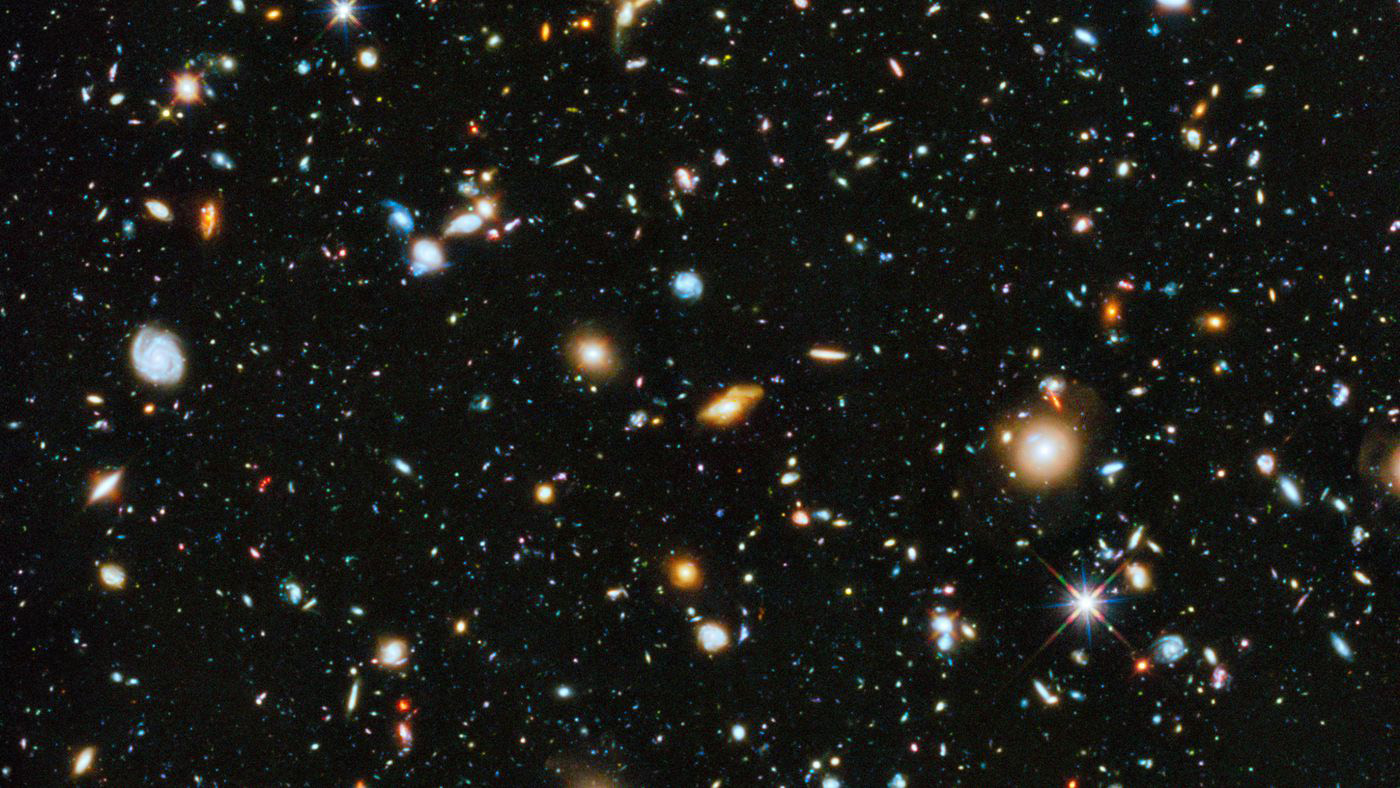 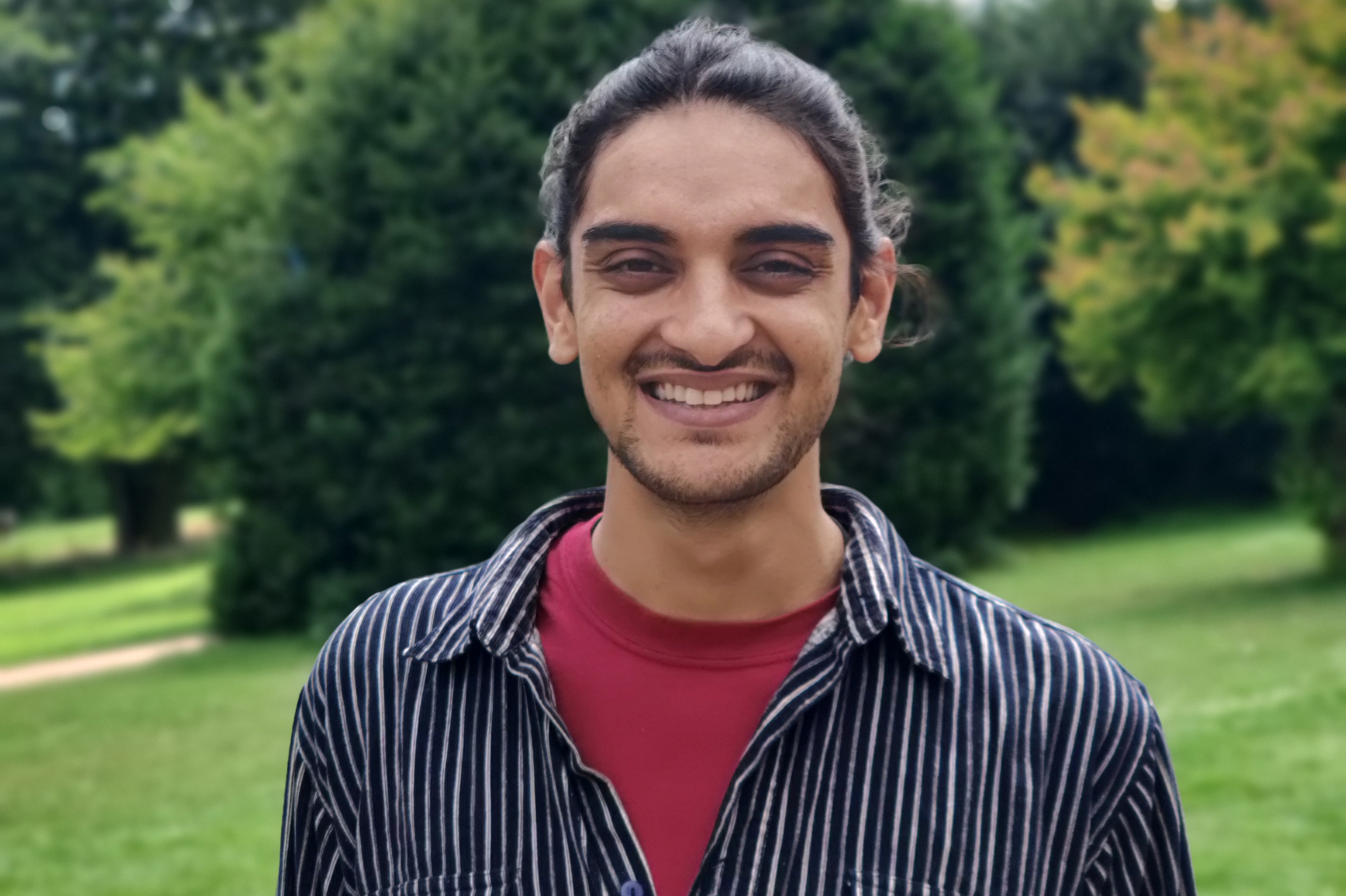 Feroz Khan, studying on the MEng (Mechanical Engineering) programme is currently working with Neutron Star Systems - made possible by the UK Satellite...