Impunity and the Rule of Law

The Initiative on Impunity and the Rule of Law: A Joint Project of City, University of London Centre for Law, Justice and Journalism (CLJJ) and the University of Sheffield Centre for Freedom of the Media (CFOM) 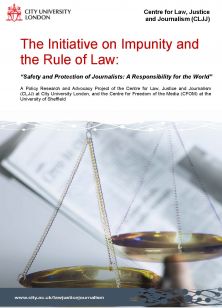 Our aims are to provide an independent platform to assess the effectiveness of existing legal, political and institutional safeguards against violence directed at journalists because of their professional work; and to present the case for more effective international mechanisms to counter such crimes of violence and to end impunity. Journalists play a vital role in providing reliable information on matters of public interest and their work can expose them to special risks of physical violence and arbitrary prosecution. As documented by UNESCO, the annual toll of targeted killings of journalist, and the effective impunity related to crimes of violence against them, have risen to historically high levels, causing serious concern among journalists, jurists, human rights organisations and governments. States are obliged under international law to respect and protect individuals exercising the right to freedom of opinion and expression, and to ensure that those rights are upheld. Those obligations also apply in times of conflict. Intimidation and violence directed at journalists because of their role in monitoring the exercise of state powers and matters of public interest, as well as failures to investigate and prosecute such crimes promptly and effectively, have been identified by United Nations bodies and other relevant organisations as matters that require a coordinated response by States.

The Initiative is conducting collaborative research and consultation among academic and legal experts, national government officials, Inter-Governmental Organisations, and civil society and media representatives, to advance our aims.

Working Papers from the June 2011 conference

The findings and provisional draft proposals from Phase One of the work will be considered at a gathering of experts and policy-makers at City in June 2011. Our initial research consists of two strands, focused principally but not exclusively on the European area:-

Phase Two of the Initiative's programme of research and policy development began during 2011 and is currently ongoing. It will construct a wider international platform of academic and legal expertise, in collaboration with governmental and non-governmental bodies, to develop and seek acceptance for the enhanced political and legal instruments needed to realise the Initiative's founding aims. Papers and events from phase two can be found in our resources section and continue to be added to.

Directors of the Initiative

William Horsley, International Director of CFOM, University of Sheffield, and Coordinator of the Impunity Initiative

Prof Jackie Harrison, Chairman of CFOM Centre for Freedom of the Media, University of Sheffield

Lord Frank Judd, Saferworld and the UK House of Lords

Edward Mortimer, Director of the Salzburg Global Seminar and former adviser to the UN Secretary-General

Tumber H. (2011) Reporting under Fire: The physical safety and emotional welfare of journalists, in B. Zelizer and S. Allan, (eds.) Journalism After September 11, Routledge 247-262

Tumber H. (2006) 'The Fear of Living Dangerously: Journalists who report on Conflict', Journal of International Relations Vol. 20 No.4.