The need for adaptive capabilities arises in every type of computing system but becomes essential in highly distributed systems with heterogeneous components operating under non-centralised forms of control such as cyber–physical systems interacting with the physical world (e.g. systems embedded in vehicles or medical devices; systems in smart devices such as smartphones, smart appliances; systems controlling critical infrastructures), and systems advocating a computing-as-a-utility approach (e.g. service and cloud-based systems).
Established within the Department of Computer Science at City, University of London, the Research Centre for Adaptive Computer Systems and Machine Learning (ACS-ML) conducts research aimed at addressing fundamental issues related to the engineering of adaptive computer systems, including the fundamental control structures and algorithms for the adaptation of such systems (e.g. autonomic, semi- or fully-supervised structures), and the preservation of quality and security properties in this process.
An essential element in the engineering of adaptive computer systems is the ability to learn from data and knowledge related to them, including, but not limited to, data managed and processed by them, data arising from their operation (e.g., user interaction data, system performance and deployment data, system environment data), as well as data that are publicly known for systems similar to them.
To this end, the ACS-ML centre's research will cover neural-symbolic computing, deep learning with symbolic reasoning, knowledge extraction from big data and explainable AI, Semantic Web technologies and knowledge graphs, and analysis of rich media information including video, audio, multimodal and spatiotemporal data analysis.
ACS-ML is also a member of the EPSRC Network+ on Human-Like Computing (HLC) and the City Data Science Institute (DSI).
ACS-ML is also actively involved in the management and delivery of City's MSc Data Science and the MSc in Software Engineering.
Publications: Google Scholar. 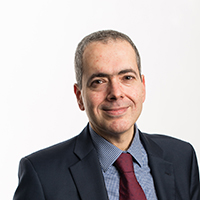